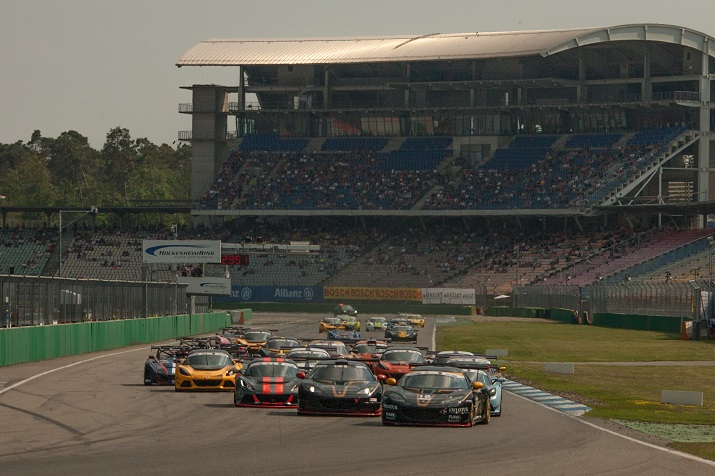 The 2018 Lotus Cup Europe season got underway at its now-traditional curtain-raiser at the Hockenheim Historic event. Taking place just a fortnight after the 50th anniversary of Team Lotus legend Jim Clark’s untimely passing at the German venue, there was plenty of Lotus flavour to the weekend, with a Type 49 Formula One car and Type 25-edition Exige on display, and attendances from Clive Chapman and members of Clark’s family and the Jim Clark Trust, who were presented with a cheque for €5000 by the event organisers.

Clark’s spirit of gentlemanly competition resonates throughout the Lotus Cup Europe field, which was headed here by reigning champion John Rasse, who would be kicking off his quest for a third crown with a brand new Exige. Opposition would be coming from Xavier Georges, Steve Williams and Tamas Vizin in the V6 Cup class, whilst other title challengers included Christophe Lisandre in the 2-Eleven category, David Harvey in Open and Sven Pettersson in Production. 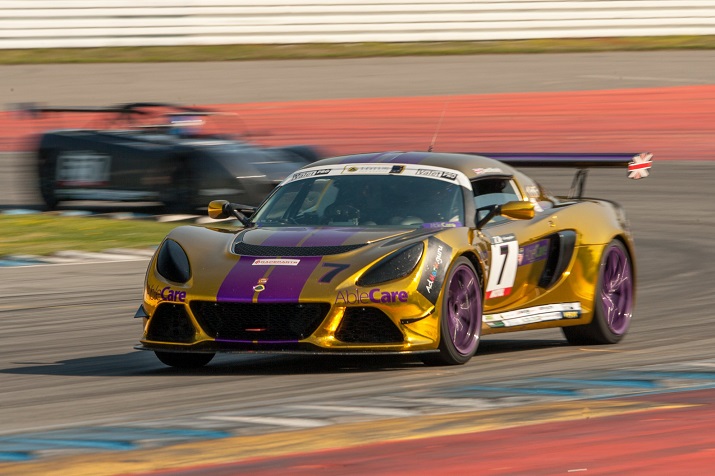 Temperatures approaching 30 degrees – more like July than April – greeted the drivers on Friday morning, and wouldn’t let up throughout the weekend. This didn’t seem to affect Xavier Georges, who topped the opening session, but the biggest surprise came from Jason McInulty, graduating from the Production class with the ex-Gregory Rasse and Jon Packer Evora. He held second place, around three-tenths off the pace, and revelling with oversteer on worn rubber for the opening session.

McInulty held fourth overall in the afternoon session, but lost a tenth to the ultimate pace, which was claimed by Bence Balogh, topping an Evora 1-2 ahead of Williams, whilst Vizin took third and fastest of the Exiges.

Christophe Lisandre and Benoit Roger shared the 211 honours, and whilst having swapped his V6 Exige for an older Series 1 car, Andrew Wright looked favourite for the Open class. In Production, Pettersson was also putting in some strong performances ahead of qualifying.

When it came to settle the starting grid on Saturday morning, Balogh held onto his advantage with Williams making it an all-Evora front row, both wearing the black-and-gold colours beloved of Lotus fans the world over.

Reigning champion Rasse and his 2017 title rival Georges shared row two, with Egon Burkus and David McInulty behind. Vizin and Thierry Verhiest were next up, before Lisandre headed the 2-Elevens in ninth and Jason McInulty no doubt a little frustrated to only qualify tenth after a stellar performance in practice. 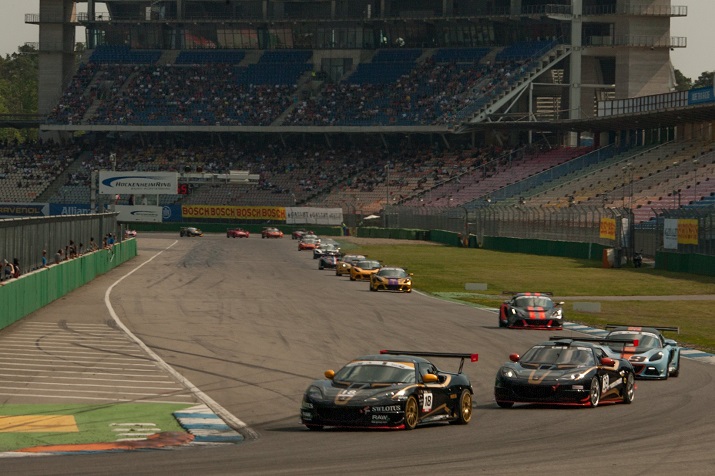 In the continued high heat of Saturday afternoon, Balogh lost out to Williams at the rolling start, with Georges, Rasse, David McInulty and Vizin following behind. In the opening laps the two Evoras pulled away from the battle for the final podium place, which was livened up by Jason McInulty, Having put his qualifying woes behind him, Jason grabbed his chance with both hands and displayed a swashbuckling spirit that moved him up to seventh place by the end of the opening lap.

Jason passed Vizin for sixth next time round, then spent a couple of tours following his brother, before demoting David’s Exige and the reigning champion on a single lap. Not content with this, he passed Georges, then headed in the direction of his fellow Evora drivers, who were disputing the lead.

With the Evoras now out of reach, Rasse, Georges, David McInulty and Vizin had plenty of motivation to be the best Exige, as witnessed by a fierce fight in which McInulty was set to follow his brother home, only to lose out to Rasse late on. Georges had a much tougher time, falling from third at the start to an eventual seventh place behind Vizin.

At the front, Williams spent just four laps in the lead before the polesitter passed, but if anyone expected this to be the Hungarian’s day, they’d be mistaken, for Balogh was unable to shake off his rival. On lap ten, Williams pounced and regained the lead, which he’d hold to the flag as Jason McInulty closed in, eventually taking third place just three seconds off the leading pair.

Behind Georges, Verhiest finished eighth just a few seconds in arrears, almost 20 seconds ahead of Tibor Valint, who was chased home by runaway 2-Eleven leader Lisandre. He was followed by Daniel Palma’s Exige and Wright, the Open class winner. The 211 podium was completed by Frsnck Laroche and Roger, whilst Storey and Matt Bartlett joined Wright on the Open rostrum.

Having dominated practice and qualifying, Pettersson found he had to work hard to fend off the attentions of Hedoin, and the pair finished just three-tenths apart. Cederholm lost nearly 15 seconds over the 15 laps they completed, but held on for a class podium. 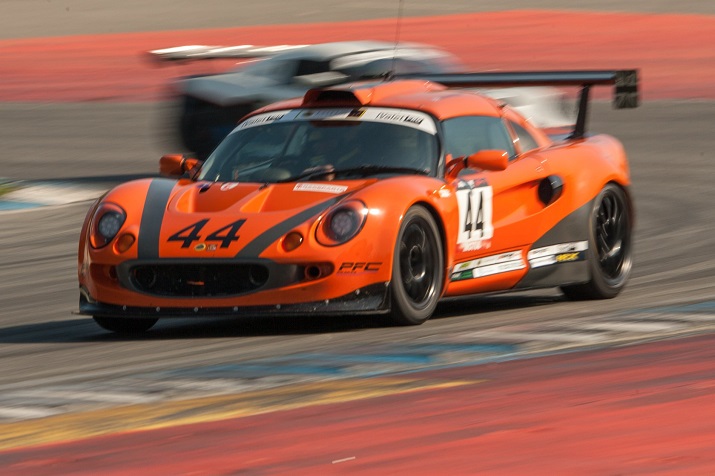 Having lost out on the rolling start, poleman Balogh had an even tougher time in Sunday’s standing start race, dropping to fourth on the opening lap. Matters were far more pressing, however, for David McInulty in 12th, and Lisandre, who completed the first tour at the tail of the field.

At the head of the order, Williams began to pull away once again, with Rasse and Jason McInulty completing the top three. Behind Balogh, Georges, Vizin, Valint, 2-Eleven leader Christopher Laroche, Verhiest and Open leader Wright completed the early top ten.

Jason’s second race would not go as smoothly as his first, and he lost out to a recovering Balogh on lap eight, and would be unable to overcome Rasse, who also lost out to the Hungarian. Balogh’s recovery put some pressure on Williams, but the Briton kept a second between the two black Evoras to claim his second victory of the event.

Vizin passed Georges for fifth place on lap five, whilst Valint dropped behind Verhiest and the recovering David McInulty. Laroche would fall to 12th by the flag after Palma and Robin Nilsson passed him late on, but the 211 win was fair compensation, the Frenchman heading compatriots Philippe Loup and Nathalie Genoud-Prachex on the class podium. Lisandre, meanwhile, could only finish in 24th place after a tough race at the back.

It would be a second Open class win for Wright, who finished in 13th overall, with Bartlett 18th and Dave Carr in 22nd as the other podium finishers in class.

Pettersson had a less troubled run to take his second Production win, but there was plenty of drama behind as Andrew Dolan, making a return to the series, battled his way to second in class. He had plenty of opportunities to show his fighting spirit during the race as he fought his way up the order, and beat Mark Yates to the second step of the podium in a car two decades older than its immediate opposition. 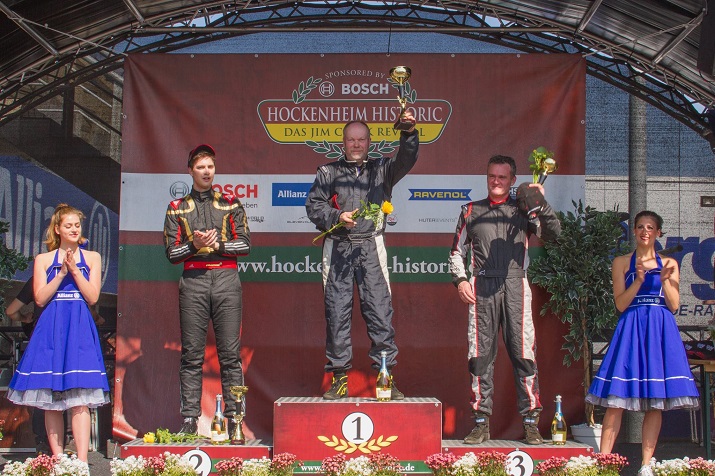 The 2018 season got off to a storming start in the sweltering conditions at Hockenheim, and the pace of the Evoras wasn’t expected, especially from Jason McInulty, one of the weekend’s big surprises. However, it was the experienced hand of Williams that steered to both victories, and it seems as though Rasse has a fight on his hands, although it’s worth noting that he struggled a little here 12 months ago.

Lisandre looks to be fastest in the 211 class again, but fortune could play its part in the title fight again. By contrast, Wright and Pettersson could be title favourites with their faultless performances in Germany, but Dolan’s race two performance will have been one to savour.

The next rounds of Lotus Cup Europe take place in Paul Ricard, France on 19-20 May, whilst highlights of Hockenheim will be shown on Motorsport.tv shortly.

LoTRDC would like to thank Chris Emery of AIM Technical Services for making a huge effort to support the event, as well as sponsors ValetPro and Raceparts for their help.