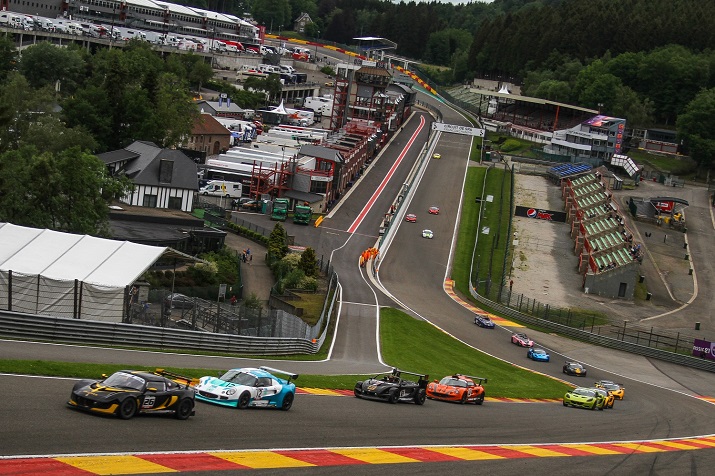 The Belgian Ardennes-situated Spa-Francorchamps has been a permanent and hugely popular fixture on the Lotus Cup Europe calendar, but the 2018 event took place a month earlier than recent editions. This meant that the drivers had just two weeks to prepare after the triple-header at Paul Ricard.

With a stunning triple win in France last time out, Hungary’s Bence Balogh would be favourite for victory at Spa, but reigning champion John Rasse was on home turf, the perfect place from which to launch his title attack. With the Evoras of Balogh, Steve Williams and Jason McInulty setting the pace at previous rounds, the Exige runners needed to hit back, whilst Christophe Lisandre, Christopher Laroche, Andrew Wright and Sven Pettersson were hoping to continue their pacesetting form in the other classes. 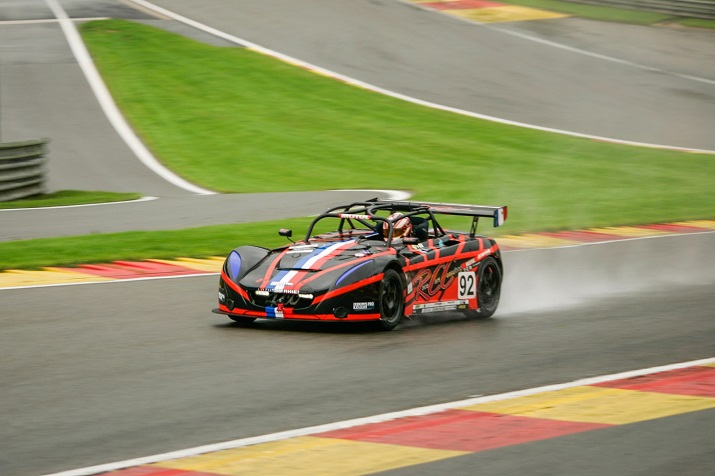 All three pre-race sessions took place on the Friday, which began with a thunderstorm and was so wet that the paddock tunnel was completely submerged. Spa traditionally favours the brave, and it was Lisandre and then Rasse who would set the practice pace.

Once the worst of the rain had passed over the circuit, conditions remained very damp, and it was the reigning champion who continued on his pace from second practice to take pole position. Lisandre also had an excellent qualifying, taking third behind Paul Ricard winner Balogh.

Thierry Verhiest also had a good session, taking fourth ahead of Anthony Fournier, the Frenchman making his series comeback in a 2-Eleven. Another returnee, Nikolaj Ipsen, was sixth ahead of Steve Williams, Tamas Vizin and Laroche. Tenth place was claimed by Jason McInulty, who no doubt would have expected to be higher up the grid.

The Open class pole was taken by Wright in 15th place, three ahead of nearest rival Pete Storey, whilst Pettersson set the Production class pace from Mark Yates and Thierry Hedoin. 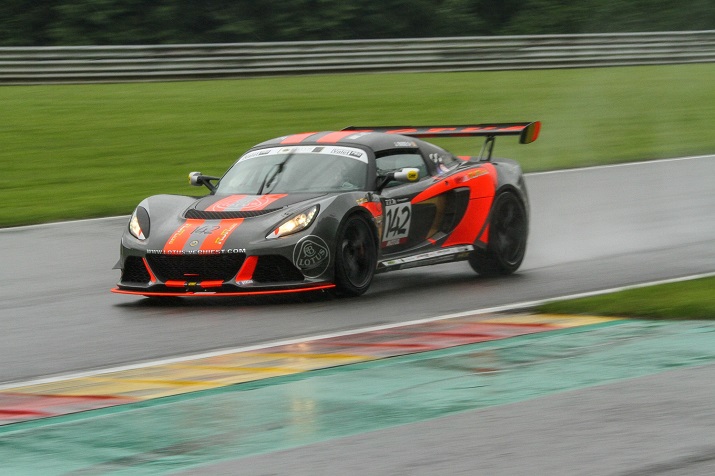 Taking place on the second day of the meeting race one was, to the relief of many, dry if a little overcast. Pole man Rasse took full advantage of the rolling start to lead but if he was looking set for his first win of the season, fate would deny him with a puncture just three laps in.

Rasse’s woe was Balogh’s delight, as the Hungarian now led the race, with a fast-starting Vizin running second. Also finding oodles of pace was McInulty as the Briton stormed his way through the field in no time at all, and not long after Rasse’s retirement challenged for the lead, quickly demoting both of his Hungarian rivals. Balogh gave valiant chase, but it was all to no avail; nevertheless second was fine reward for his efforts, whilst Vizin was a delighted third.

Rasse wasn’t the only one to have problems; 2-Eleven frontrunners Christophe Lisandre and Benoit Roger both hit the barriers at the back of the circuit, whilst Ipsen and Robin Nilsson touched at the Bus Stop and the former was eventually forced to call it a day with a double puncture.

Those who survived the attrition did well to figure behind the top three, whether it was the experienced Steve Williams, charging Xavier Georges, or composed performers David McInulty, Tibor Valint and Verheist; all finished in relatively close company. In ninth place, Fournier took the 2-Eleven honours ahead of Laroche, whilst behind the pair, Wright chalked up another Open win, heading class podium finishers J-P Genoud-Prachex (2-Eleven), Storey and Ian Fenwick (both Open).

In the Production class, Hedoin took the early lead after polesitter Pettersson dropped back, but despite briefly losing another place to Yates, the Swede chased down the category leader and found his way past to take the flag. Cai Cederholm completed the Production podium. 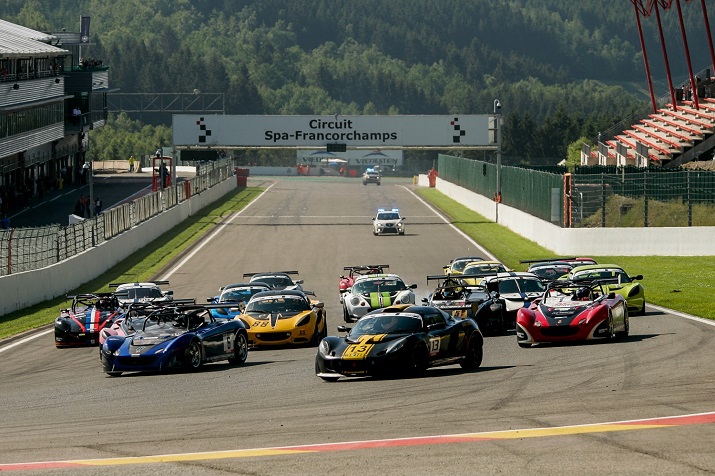 By Sunday, Spa had shown its true colours, with glorious sunshine completing a weekend of all weathers so typical of the Belgian Grand Prix venue. The final race of the weekend took place early in the day, and Balogh made sure he took the lead off the standing start, leaving McInulty to chase an increasingly distant Evora.

If McInulty eventually began to settle for second place, he’d put up too much fight early on, and now his tyres were beginning to show serious signs of wear, leaving the Briton powerless for the eventual attack from behind. The assailant came in the form of race one podium finisher Vizin, who traded his earlier delight to a state of near-ecstasy normally reserved for the winner. The leading pair stood proud on the podium, saluting the Hungarian national anthem, with the victor hoping that he would soon join his compatriot on the list of Lotus Cup Europe champions. McInulty was still buzzing from his win from the previous day, and enthusiastically joined the celebrations on the rostrum.

Fourth place was claimed by Georges, following up on his strong Saturday performance, just reward for a tough weekend at Paul Ricard, when he had to sit out the races with gearbox woes. Williams was fifth, followed home by David McInulty, Valint, Ipsen and Verhiest.

In tenth place was Fournier, taking a second 2-Eleven victory on his return to action. Laroche and Roger would complete the class podium.

Pettersson had an easier time of it in race two, keeping his Elise Cup R well ahead of Hedoin and Yates, who had their own scrap for second in class, with the Frenchman taking the nod. 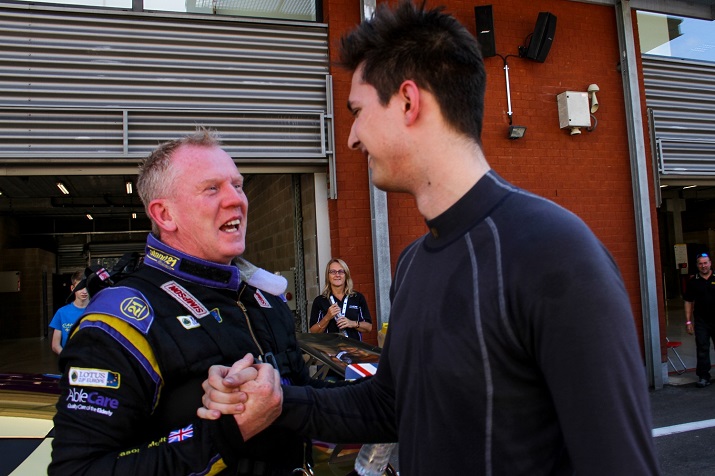 Following the spectacular weather of the opening two events, Spa-Francorchamps provided plenty of challenges for the drivers who coped admirably in, at times, very difficult conditions. With Jason McInulty breaking into the winners’ circle the V6 class remains open, at least to anyone with an Evora at present, but Balogh’s rivals will need to work hard to prevent the Hungarian from taking the category title.

Another perfect score for Wright and a clean sweep for Pettersson ensures that Balogh will need to fight for the championship, but the 2-Eleven class continues to provide plenty of surprises this season, with Fournier’s double adding further intrigue to the battle.

Lotus Cup Europe heads to Magny-Cours in France next, and this time the drivers have a month to prepare their cars for the rounds on 6-8 July.